Cross-linked polyethylene, better known as PEX, has become a major piping revolution over the past few years. As it is a flexible piping option, it makes for easier installation inside homes opposed to rigid copper or PVC pipe. However, while PEX is chosen for many re-piping and new piping installations for its benefits, does it still have the same problems as other piping options when it gets cold? Do PEX pipes freeze and burst like the rest? 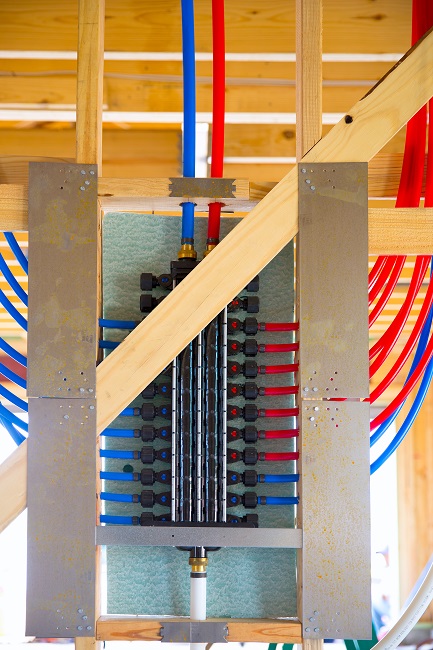 The simplest answer is that PEX pipes can freeze if not insulated, and they can burst like copper or PVC when that happens. However, as a plastic, PEX has the certain benefit of flexibility. Unlike copper of even PVC, PEX has the certain ability to slightly expand and contract. This means that when water freezes, the pipe can expand to accommodate it without bursting. However, PEX is not perfect in this regard. After enough freeze and thaw cycles, the material will lose that flexibility. This means while PEX can withstand freezing more than other piping options, but it will eventually spring a leak as it gets worn down.

PEX piping isn’t a good choice for outdoor use. Like other piping options, it needs to be insulated to protect from freezing. So while the first time your PEX freezes probably won’t be an issue or cause bursting, you will need to find that pipe and make sure it is insulated so it doesn’t happen again.

If you have rapidly aging plumbing and are looking into new plumbing options, PEX is an excellent choice. It is more affordable, flexible, and has less capacity for contamination compared to other piping options. However, while PEX is a good choice, it still needs care like more traditional piping options. If you are considering PEX piping as a replacement for your leaky old pipes, contact us today to see what we recommend for your unique needs.

More and more homeowners rely on natural gas. While natural gas provides many benefits, it’s expected that gas leaks will happen. Gas leaks not only lead to higher bills, they can be dangerous. Prolonged exposure to a gas leak can cause numerous health problems, including headaches, nausea, trouble breathing, or dizziness. Knowing the signs of…

We’ve all been there. A drain causes issues for us, and we try to take care of it ourselves. Mostly, it can be an easy fix, but that’s not always the case. Sometimes, this issue goes much deeper than just a simple clog. The best way to handle drain issues that persist is to have…

If you’re searching for a residential or commercial plumbing in Tyler, Texas, who won’t waste your time or money, schedule an appointment with East Texas Leak Locators. In the area for 30+ years, they’ve built their business on outstanding customer service. Tyler, TX Plumbing Company Too many Texas plumbers take your call and leave you…

There is nothing quite as memorable as a badly clogged shower drain. Plunging, praying, cursing – you’ve tried it all. Nothing works and the situation is bound to become urgent sooner, rather than later.  Below we will discuss what not to do when removing shower drain clogs. Depending on your household composition, your shower may…

Keeping your foundation safe is a tricky issue in East Texas. Constant droughts make the soil pull away from your slab foundation’s perimeter. It also makes the soil under your house shift. But parched trees can also hurt your foundation and the plumbing that extends from it. If you notice changes in your water pressure…